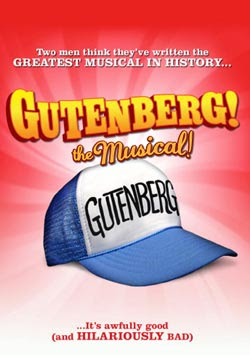 “As a form it’s kind of insane,” says Scott Brown, one-half of the writing team behind Gutenberg! The Musical!, “a musical is sort of an inherently unnatural thing that has to be forced into existence by madness, or money, or the equivalent.”

The equivalent in this case were the pitches that the other half of the creative team, and Brown’s childhood friend, Anthony King had to sit through as an intern at Manhattan Theatre Club.

“I had to see readings of tonnes of musicals” says King, “and most of them were really terrible, and after a while I started asking myself who are the people who write these horrible things and how does no-one tell them it’s terrible? Not just a terrible show but terrible ideas and everything? So it was kind of on a dare at first - we decided to write a few songs from a terrible musical and submit them to my boss under fake names to see what he would say about them, and then it took on a life of it’s own and we were seduced by our own horribleness.”

Brown says, “That sort of insane determination that must go into [creating those horrible musicals] was interesting to us, and that’s why we came up with Bud and Doug.”

Bud and Doug are the fictional authors of Gutenberg! The Musical, the show-within-a-show they have written with little knowledge of it’s real-life subject; Johannes Gutenberg, inventor of the printing press. Aided only by a pianist and a series of hats Bud and Doug recreate 30 characters from Gutenberg’s life, including fictional love Helvetica to whom they mistakenly attribute the type-font, all as part of a pitch to the Broadway producers they imagine are secreted within the audience.

Scott and Brown originally performed the show themselves as a 45 minute skit at the Upright Citizens Brigade Theatre, which King now runs in New York. It turned out there really was a producer in the audience, and he offered to take the show to London if they added a second act. After success in London they brought the show home where it won the 2006 New York Musical Theatre Festival Award for Excellence in Musical Theatre Writing.

“It grew up in the nurturing atmosphere of a basement comedy club and we didn’t necessarily envision it going beyond that,” says Brown.

“We definitely never dreamed that it would become something that would play around the world,” says King.

While Bud and Doug aren’t the most talented guys in the world Brown and King had to create characters that audiences would want to see succeed nonetheless.

“It’s definitely like the audience is laughing at these guys a bit but the charm of the show is that they’re incredibly likeable and energetic, so the audience is [also] rooting for them,” says King.

“That’s a good term for it – we’ve always really liked people who have no idea how off the deep end they are.”

Brown adds, “They are beautiful losers who over the course of the show create their own reality just with the force of their own idiotic aspirations.”

Like many satirists Brown and King admit to loving the target of their jibes.

“We were big musical theatre nerds growing up,” says Brown, “there’s something glorious and sort of liberatingly stupid about bursting into song to express oneself. I think [Gutenberg! The Musical!] isn’t so much a critique of musical theatre as our full embrace of it’s silliness and it’s triumphs.”

A truly unconditional love then?

Are there any musical theatre practitioners that should be punished?

“I don’t think there’s anything that Guantanamo Bay could do to musical theatre that it hasn’t already done to itself, it is an art form for masochists, that seems pretty clear.”