Bound for Glory by Woody Guthrie

Woody rides the rails and takes us along for the journey. It’s growing up with a smirk and a knowing smile and seeing your country for all it is – the good, the bad, the ugly – and finding a way to put it all in song, in a way that feels special and pure to you. It makes you want to pick up an old nylon string and hit the road yourself. Sure, there’s probably a little poetic license in some of Woody remembrances, but that’s art – like Kafka said; it should be larger than reality, while still reflecting it.

From a dust-bowl boyhood with a mentally ill mother and financially struggling old man to falling in love with an apricot picking young girl whose family wait out the depression while Woody’s stream-of-consciousness singing keeps them alive.

Woody sees the inherent unfairness in the failed lassaix-faire Free Market Capitalism of his time, much as we are seeing now, but like another gangly man with a good voice that we are hearing today, he never gives up hope in the actual people he encounters and their ability to survive, mend and learn from their predicament.

Particularly poignant in this time of recession reading of whole groups of men going from door to door begging for work, (before Keynes pointed out that social security was a right and need and not a privilege) as Woody himself does before realising he can live by peddling his songs to sailors, dipsomaniacs and insomniacs in late night bars and taverns. Telling how those men are often turned away by those who can help most (nuns, priests and the middles classes) while those with barely enough to feed themselves will wrap something sweet in some oil paper without hesitation, and the only string attached being some recycled cooking twine.

I love the scene’s Guthrie vividly paints of his boyhood gang (The Boomtown Rats) fighting in hot dirt, then a young man discovering the magic and music of people and travel, and finally, when offered the chance to sell-out and become an Idol-like crooner in a fancy big show for The Rockefellers, he instead escapes to stroll as a proletarian pied piper through the streets of New York, a trail of children dancing behind him, before sailing into the unknown with bad whiskey on his breath on a stray barge...

View all my reviews.
No comments:

The Road by Cormac McCarthy


This beautiful piece of writing could be described as an epic prose poem. With no chapters, instead broken up into self-contained stanza-like paragraphs, it's simple story of a father and son lost in a post-apocalyptic landscape is creamily rich with vivid poetic imagery and powerful emotions that are carried across with the sparsest of Everyman dialogue that subtly carries real human soul through the little white lies of caring the father creates for his son as he unconsciously begs for him not to lose faith, as his mother did, in humanity and the hope of finding other 'good people' alive in what remains of America.

The source of the apocalypse, or it's type, is only inferred and never named, as it is how the father and son deal with their imbroglio that is important, not what or who caused it.

In this and other senses it is often what McCarthy and his characters don't say, rather than what they do, that makes one feel the booms and bust of luck and misfortune as if you were a silent impotent deity watching these two hapless travellers and wishing them luck in their seemingly doomed journey along a road lifelessly bereft of all hope, or is it?

The evocative descriptive narration that says more that simple straight exposition could ever say is a fine example of that great creative writing teacher cliché 'show, don't tell.'


View all my reviews.
No comments:

Braindroppings - Featuring Juke Baritone, & MC'd by Benito, after the yob-mardi gras this Sunday (Click the poster below to enlarge it.) 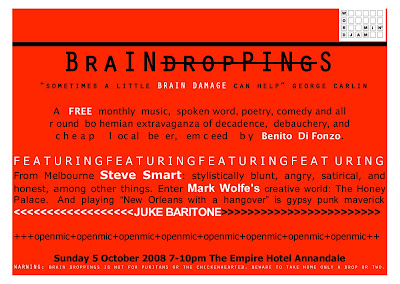