French-Canadian playwright Olivier Choiniere's Blisstakes us into the tabloid-fuelled minds of four shopping centre employees. Like the pages of a trashy mag, it juxtaposes their obsession with Quebecois chanteuse Celine Dion against the tragedy of a crippled girl beaten by her father. Blissdoes this in a heightened world – it is in turns a serious social commentary and blackly comic theatre of the absurd.

The director of the Australian premiere, Shannon Murphy, says: “What really drew me to it is that even though it is so incredibly dark there's actually a lot of humour in it, some of it disturbing and some just outright funny.”

Much of the story emerges from the mind of character the Oracle (Krew Boylan).

“We are actually watching the production through her mind. In a way the Oracle is the Celine Dion character in the sense that she moves from being the girl at the supermarket to being Celine Dion who becomes the victim because she has the miscarriage who then becomes the daughter who the family come to visit, which then becomes a domestic violence case who then . . . ” Murphy says, before trailing off into laughter.

Boylan, along with Libby Fleming, Simon Corfield and Matt Hardie, portrays the characters in the real and imagined worlds of the play.

“My job is to work hard at creating as much clarity within the piece as possible,” Murphy says.

Murphy is no stranger to controversial productions – her shows My Name is Rachel Corrie and Age of Consent dealt in turn with the Israeli-Palestinian conflict and the Jamie Bulger murderers. Murphy believes that, though never purposefully courting controversy, her non-conventional choices stem from being born in apartheid South Africa and growing up in Hong Kong during the Tiananmen Square riots.

“These things have really informed what I do and I believe that I pick stories that do make a bit of an impact,” she says.

Bliss uses its bizarre narrative form to examine a cult of celebrity where, Murphy believes, the turns and travails of celebrities carry too much weight in our lives.

“Like when Michael Jackson dies and how terrible that is [but] a guy that's lived down the street for 20 years dies and we don't even notice,” she says.

Are trashy magazines a blackly comic theatre of the absurd all of their own?

“Completely, and that's what this piece is," Murphy says. "These people work this job and for their escapism they fantasise about celebrities and then their fantasies get incredibly out of control.” 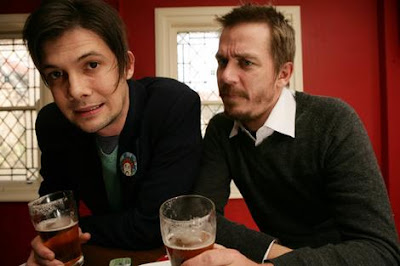 "Brothers up in arms"
Sydney Morning Herald, August 21, 2009
An Irish play about squabbling siblings will resonate here, writes Benito di Fonzo.
Merging psychotic characters, bleak outlooks and frank episodes of violence, controversial Irish playwright Martin McDonagh's tragicomedies have been hits around the world. So much so that in 1997, McDonagh became the first playwright since Shakespeare to have four plays running concurrently in England.

Peter Carstairs, best known as the director of award-winning Australian film September, has chosen McDonagh's 1997 black comedy The Lonesome West for his first foray into the world of theatre.

"He moves from teenage love through to the hypocrisy of the church through to consumerism versus relationships through to happiness compared with living a miserable life - all within the space of two hours," Carstairs says.

The third part of McDonagh's Leenane Trilogy, The Lonesome West tells the story of squabbling Galway brothers Coleman (Toby Schmitz) and Valene (Travis Cotton). Whiskey-priest Welsh (Ryan Johnson) tries to steer them towards a love he himself is unable to secure, despite the attentions of bootlegger's daughter Girleen (Sibylla Budd).

The action takes place in a harsh landscape, where the local girls' football team is celebrated for putting its opponents in hospital and where murder, suicide and verbal abuses are everyday occurrences.

Welsh's reformations are hampered by a hypocrisy that allows the brothers to be absolved of murdering their father via the confessional, while a boy who commits suicide in the lake is eternally damned.

"There is an overlap between Australian taste and Martin McDonagh's style,'' Schmitz says. ''The Irish oral tradition of being a great storyteller even if you are illiterate has some currency here. It's a bard culture, if you will.''

Cotton adds: "I think Australians identify with underdogs. They can relate to these people."

Carstairs felt their years as friends and flatmates would inform the lead actors' portrayal of the constantly fighting kinsmen.

Schmitz admits such violence can be draining. "It does cost you having four fights, six days a week."

Cotton adds with a wry smile: "It's all about not hurting Toby."