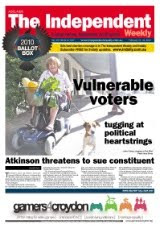 
Hey, hey, Bobby Dylan but I wrote you a play. The Chronic Ills of Robert Zimmermanis a well-crafted journey into the life and times of one of the most enigmatic recording artists of our lifetime.

Constrained by Dylan’s notoriously tight copyright control of his music, this strongly performed play still manages to catch the essence of the man and his music. It is presented by the Sydney-based Tamarama Rock Surfers. Matt Ralph plays Dylan as the unreliable narrator, the song-and-dance man, the master illusionist. Thankfully, he avoids mere imitation of Dylan’s singing style and is ably backed by Simon Rippingale on upright bass, ukulele and harmonica (though not all at the same time).

Lenore Munro plays nicely with a litany of characters, including Joan Baez and Dylan’s ex-wife, Sara Lowndes – and her Yoko Ono is not to be missed. And while Ralph’s Dylan is the anchoring performance, Andrew Henry’s remarkable supporting role(s) as Woody Guthrie, John Lennon, Allen Ginsberg and Johnny Cash threatens to steal the show. Despite the occasional rushed delivery by Ralph, playwright Benito Di Fonzo has penned a great ode to a wordsmith of puzzling proportions. With a bowerbird-like randomness, Di Fonzo grabs and snatches at Dylan’s lyrics, off-hand comments and literary ripostes, threading them into a (mostly) coherent narrative.

Diehard Dylanites can sit smugly congratulating themselves as they identify key phrases and separate the real from the fictional. Those less familiar with the work of His Bobness will enjoy the rapid-fire exchanges and snippets of what could well pass as Dylan songs (the take on "Girl from the North Country" is a hoot!). If you’re confused by the title, just track down Dylan’s recent biographical tomes.

The Chronic Ills… is a freewheeling ‘glissendorf’ pastiche of folk history, interview, myth, song fragment, biography and musical interlude that rattles past at breakneck speed like an angel-headed methamphetamine jive-talking ‘60s hipster. Unable to secure rights to Dylan’s catalogue, the production avoids a nostalgic run through the highlights of the canon. Instead, musical interludes are distorted renditions of tunes performed by Dylan; the result almost as contradictory, confusing and irreverent as the man himself.

The cast rise to the challenge of an astounding number of words, characters and identities. Joan Baez is as annoying as she should be, John Lennon is hilarious and Simon Rippingale’s musical accompaniment is outstanding in its subtlety and effectiveness.

Those new to Dylan may get tangled up in blue but for fans of the man, concept or era, don’t think twice, it’s great.

The Chronic Ills Of Robert Zimmerman continues at The Bakehouse Theatre at 8pm until Sat Feb 27.
http://www.ripitup.com.au/article/490
No comments:

THE CHRONIC ILLS OF ROBERT ZIMMERMAN - AKA BOB DYLAN (A LIE): A THEATRICAL TALKING BLUES & GLISSENDORF

If there is a Fringe award for the longest titled production, then this show has won it hands down. The title is a small indication of the wonderfully strange, bizarre, theatrical experience awaiting.

As written by Benito Di Fonzo, this is Bob Dylan’s story as Bob himself would probably tell it - strange, lyrical, mystical and very heavy on name-dropping.

The play is so well written, directed and performed, that this non-Dylan fan was rapt. Director Lucinda Gleeson wrings every drop of talent from her very fine cast and has an obvious eye for humour and emotion that never becomes overdone.

On a nicely cluttered, but never distracting set designed by Eliza McClean, Matt Ralph shines as the Man Himself, Zimmerman/Dylan. Looking not unlike the singer/poet, Ralph never leaves the stage during the show’s hour long run and barely stops speaking or singing - and certainly never stops performing. This man IS Dylan and the audience never once doubt that. Ralph is also the Musical Director of the show and excels at that as well.

Complementing Ralph wonderfully are the multi-accented, very funny Andrew Henry and the very talented, beautifully voiced, Lenore Munro; both playing a multitude of characters. One of their many great moments has to be as John Lennon and Yoko Ono.

Since Dylan and music go hand in hand, we must not forget the marvellous job performed by the nonspeaking muso, Simon Rippingale (also doubling as the second Musical Director).

This type of production can either turn out as a load of arty-farty wank or a marvellously engaging theatrical experience - Tamarama Rock Surfers have produced the latter.

“The Chronic Ills of Robert Zimmerman: AKA Bob Dylan (A Lie)”

Tamarama Rock Surfers combine the music of Bob Dylan with a mess of other musical icons and poets to deliver one of the wackiest shows in the Fringe so far.

The music and singing is great, the acting and bizarre fusion of ideas mostly clever and the real Dylan fans in the house didn’t mind some Dylan Thomas thrown in for good measure.

It’s an entertaining mishmash that follows the Dylan mystique and persona through the decades from his humble start as Robert Zimmerman to revered musical giant.

Matt Ralph as Zimmerman/Dylan, versatile Andrew Henry in a range of roles and volcanic-voiced vamp Lenore Munro deliver the unique dialogue in the style that young Zimmerman rapped with his contemporaries.

It’s weird but good as the musical times keep changin’.
No comments:

follow my actors on their journey to Adelaide Fringe, via Albury Hothouse at this new blog -