In Conversation with comedian Des Bishop 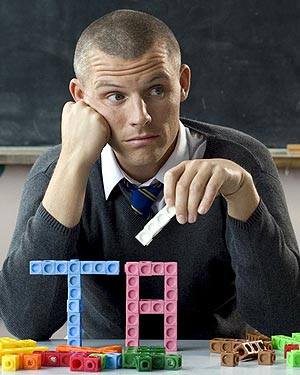 A former altar boy is one of Ireland's most controversial - and constructive - comedians.


"GHETTO tourist is the term I prefer," says comedian Des Bishop when reminded of accusations in the Irish press of being a "ghetto voyeur". It was his 2005 TV series Joy In The Hood, in which he mentored aspiring comedians in poor housing projects, that provoked such comment.

"When you decide to do a project like that there's a couple of things you expect, and one is some journalist is going to say that you're being exploitative, a ghetto voyeur, and you just take that on the chin because you go 'OK, fine'," he says. "But even if that was true it doesn't change the fact that perhaps some of these people will get something out of it."

As it happens, Bishop says at least two of his former mentees are working full time as comedians. Not that that's stopped the controversy in his adopted homeland. The 32-year-old was born the US but has lived in Ireland since he was expelled from school in New York at 14.

Bishop's supposed controversy stems from his comedy that often explores social issues such as alcoholism, the plight of the underclass and migrant workers, even Bishop's own battle with testicular cancer. How long after diagnosis does one start thinking of jokes about testicular cancer?

"What happened was very soon after I had it some of the tabloid papers decided to print stories about me having testicular cancer including an enormous front-page headline. I went to the Irish Cancer Society and said I have no interest in publicity about my illness. However, if you can guide any of this in a way that's positive for you guys I would be a hell of a lot happier. As a result of working with them I wrote a [humorous] piece for The Sunday Independent, and that was only within a couple of weeks, and it was in writing that piece that the largest majority of the material came out."

Although punters are always handy with more suggestions. "You'll say something like 'balls' to people and they'll go 'don't you mean 'ball'?"

With his accent swaying between New Yorker and Dubliner depending upon the topic - Catholicism bringing out the Irish, social change the American, Bishop is infamous in Ireland for telling audiences what they don't want to hear and admits he has always been drawn to somewhat dark social themes.

"The positive side of that is that when you can make them funny it helps other people to engage with things that sometimes they don't engage with, but that's the high ideal, in reality people are just laughing, which is fine by me as well."

"I think comedy can work in that way. Like, I did a TV show in Ireland about living on minimum wage [in the fast-food industry]. That did genuinely cause people to look at the way they behave when they're drunk. It was really just people looking and going, 'Oh, my god, is that what [we're] like at two in the morning? Is that the way we treat foreign workers?' "

Bishop himself is a teetotaller. "I stopped drinking at 19 but that wasn't because I went to too many chippers at two in the morning and abused staff. I was just a bad drinker."

The former altar boy also mines his Catholic upbringing for humour. Why does it appear that there is a disproportionate number of comics, and alcoholics, among lapsed Catholics?

"I think there's a lot of shame that goes with Catholicism," he says. "Particularly around sex, but even around expressing yourself and being who you want to be. If you've been shamed on a load of those things it's natural that when you get a voice you're going to want to, like, f---ing liberate those things."