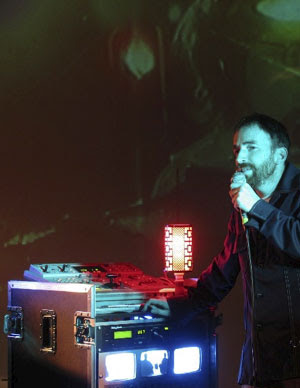 Kiwi Duncan Sarkies's combination of spoken word and music has been described as "stoner theatre".

Wed 7pm, all other nights 9pm

"Hang on," says writer Duncan Sarkies over the phone from Wellington, New Zealand, "I've got one of those devices where you put the headset on and you can walk around the house. I walk outside and I continue with my stuff - like putting out the rubbish - while I'm rabbiting away. I think the neighbours think I'm a bit mad."

Sarkies's slightly manic state could be the result of insomnia, if the show he has written with fellow New Zealander, composer Nic McGowan, is anything to go by. In Instructions For Modern Living Sarkies and McGowan perform a series of vignettes about the psychological machinations of those who occupy the witching hours when most of us are asleep, performed against a background of "found" video footage.

"When we put together the show I really dreamed up this mythical world where someone was working from their basement full of old video tapes, so I went out to the tip and bought 50 bucks worth of VHS tapes," Sarkies says.

"They have all sorts of weird stuff on them," says composer McGowan. "From Nan's 80th birthday party to training videos for things you'd never want to do."

The show was born when Sarkies began word-jamming with music loops McGowan created with iconic instruments such as a Moog theremin and a Rhodes piano.

"Straight away," McGowan says, "we were creating great moods and [Sarkies] was dropping text and characters in there just like a musician would on an instrument."

Sarkies: "Nic builds these beautiful loops and they grow on each other and you get hypnotised. I think Nic and I infect each other. He can start playing in a gloomy fashion and I'll roll with him. There are a lot of laughs in the show but it's certainly a gloomy, moody experience."

The show is constructed from the best of the collaborative vignettes.

"It's a bit like watching a radio play being made in front of you," McGowan says, "but with lots of imagery. With the projection behind us you can watch us perform or just watch the screen."

Sarkies: "We do refer to them as songs in a way but of course it's all spoken word. I do have a device that shifts my voice around as I take on a variety of characters all making it through the middle of the night experiencing the same thing - loneliness."

The characters - including a bored astronaut, a talkback radio host without any callers, and a ghost - sound like grim subjects but Sarkies, who has written for hit comedy series Flight Of The Conchords, reassures me it isn't all gloomy.

"It's definitely not like the Conchords in that I don't try and pull a gag every three minutes," Sarkie says. "You know when you listen to Nick Cave or Johnny Cash and they go to quite a dark place in front of you? It's a really nice feeling to hear someone doing that because it proves you're not alone in those thoughts. I do show a side of life that is quite dark - you do need the comedy to go there."

After success in New Zealand, Sarkie and McGowan bring their show to Sydney via a sold-out season at the Barbican Theatre in London, where the themes of ennui and loneliness proved universal.

"They really dug it," says Sarkies of London audiences. "It's really nice when you discover there's whole communities of like-minded people all around the world."

McGowan feels the unpredictability of much of his old analog technology adds to the sense of theatre.

"It really is a live performance," McGowan says. "I get very disappointed by going to electronic acts and they're just stabbing a button on a laptop."

Sarkies dislikes the term "multi-media art" and admits he has trouble labelling the mixture of spoken word, music and visuals. Some have called it "stoner theatre".

"The stoner thing is fair because it's obviously a good thing to watch when you're stoned. We do take people on a crazy, hypnotic ride. I think I would describe what we do as black-black comedy."

So it's blacker than black?

"Yeah!" he says, laughing, possibly as he puts the bins out.