Ciao Magazine (http://ciaomagazine.com.au/) recently asked me to do a Newtown for dummies type piece in the lead up to the Newtown Festival this Sunday November 13th (where I will be MCing the poetry event in the Writers' Tent at 11am.) If you can't read it my own (unedited) copy is below. 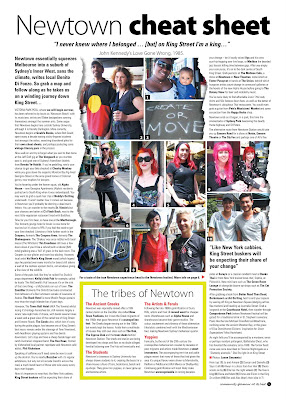 Newtown essentially squeezes Melbourne into a suburb of Sydney’s inner west, sans the climate of course.

Now walk on, trying to forget what you said to that dame at the Jeff Duff gig at The Vanguard as you stumble past it, and grabbing one of Sydney’s friendliest falafels from Rowda Ya-Habibi. If you’re pedalling get your bike checked at Cheeky Monkey as you gaze down the majestic Moreton Bay Fig-lined Georgina Street at the once grand homes of Colonial gentry, now trophies for lawyers.

You’re hovering around the 1980s artist’s collective Alpha House, now commercial apartments (Alpha’s residents pushed to South King when it was redeveloped). You may want to grab a quick hair clip at Noddy’s On King whilst here. It won’t matter how it comes out because in Newtown you’ll probably be donning a dead man’s fedora. You can wander to the nearby St. Vinnie’s but your chances are better at C’s Flash Back, next to the neat little vegetarian restaurant lined with Buddhas.

Time for your first beer since the Lansdowne, so have one at the Marlborough. This formerly grungy hole for locals is now more for tourists, but it’s close to RPA if you feel the need to get your liver checked. Likewise a little further south the Coopers, formerly The Coopers Arms, formerly The Shakespeare. The ‘Shakey’ was once riddled with local musos (The Whitlams’ Tim Freedman still lives a few doors down if you’d like a refund) with a lobster ($20) grabbing one a ‘foil’ of grass in the back room. The Coopers is now glitzier and more law abiding. However local artist Val Nart’s King Street mural (which legend says he painted over many months for beers) still adorns a wall of the roofless upstairs bistro, old windows giving a fine view of the wildlife.

Some pubs look like they’ve raided Fox Studio’s props department for their outfitting. Kelly’s Irish Pub for example, called by locals The McDonald’s Pub as it is on the site of that rare thing - a McDonalds run out of town. Likewise the ZanziBar (formerly The Oxford) looks constructed from leftovers of a Baz Luhrmann remake of Lawrence of Arabia. The Bank Hotel is more Moulin Rouge upstairs now than the tough Islander bar of past days. However The Town Hall Hotel (AKA The Townie) whilst losing it’s heritage horseshoe bar, still remains largely a locals’ late-night hole of choice, with bands several times a week and a great view of the camel toe of King Street and Enmore Roads. The Sando also, which lost it’s way during the Pokie plague, has under the steerage of Tony Townsend become one of King Street’s best music venues, with headliners playing upstairs and free bands downstairs. Let’s stop and have a cheap Sando Lager and catch Australia’s sloppiest band The Hoo Haas, fronted by dishevelled local painter, reprobate and Newtown cafe addict Phil Ricketson.

Speaking of caffeine you’ll need some by now to soak up the alcohol. You’re nearby Buzzzbar, with it’s regular exhibitions, but why not sit outside Corelli’s across the road, a much loved haunt of those who wile away whole sunny days over frappes.

Speaking of musicians it’s important to note that, like New York cabbies, King Street buskers will be expecting their share of your change - be it locally raised Ilya and his crew scat-hip-hopping over live loops, or Maddox the bearded jazz bassist killing time between gigs. Your change may take them down into the dark centre of South King street, the feral end most tourists avoid. Grab pastizzis at The Maltese Cafe, a show at Newtown or New Theatres, some kitsch at Faster Pussycat, or bands at The Union, behind which hungover artists count change in communal gallery, studio and hovels of the new Alpha House to get them to The Botany View for beer and Rockabilly.

You could even grab a guitar from Pete’s Musicians’ Market and some concoction from the Happy Herbs shop and join the buskers!

Newtown ends as it began, in a park, this time the smokestacks of Sydney Park beaconing the deadly Hume and St. Peters.

The alternative route from Newtown Station would take you up Enmore Road for a show at Notes, Enmore Theatre, or The Sly Fox. Perhaps one of Ali’s fine pide at Saray’s, or a classier meal amongst candlelight at Banks Thai or from New York trained local chef Sophie at Pickwick’s.

New mini bars such as The Green Room Lounge sit alongside bizarre op-shops such as The Cat Protection Society’s.

After grabbing a book from Better Read Than Dead, Berkelouw's, Art On King, or Gould’s, best to end your sojourn by veering off King at Newtown Square (dodging Hare Krsnas and ad hoc flea markets) and head up Australia Street. Grab a long-neck at the Courthouse Hotel, then wander through Camperdown Park (where Newtown Festival will be gated) for a traditional drink in St. Stephen’s cemetery. Poets like the late Michael Dransfield scribbled here, reclining under the ancient Moreton Bay, or the grave of Eliza Donnithorne (Dickens’ inspiration for Great Expectations’ Miss Havisham.)

'As night falls you’ll be accompanied by a murder or emos or perhaps resident poltergeist Bathsheba Ghost who has haunted the cemetery since 1848. The former head nurse was once described to Florence Nightingale as a “Sluttenly alcoholic.” She fits right in on King Street.

- The Ancient Greeks
Newtown was reputedly named after a 19th Century tailor on the ZanziBar site called New Town Fashions, but it was the Greek migrants of the 1950s that gave Newtown it’s cosmopolitan feel. The Greeks began moving out in the 80s but wisely kept the leases. Aside from a multitude of houses they still own sites such as The Hub, The Cyprus Club (with it’s backgammon basement) and the tram sheds behind Newtown Station. The sheds and station are being developed into shops and flats so no doubt alleged familial bickering over The Hub will eventually end. There are even still a few, formerly illegal, Greek card clubs.

- The Students.
Newtown’s locality to Sydney University has always drawn students to it, creating the basis for a share-house culture of bars, bookstores, bands, and op-shops. They grow into yuppies, or never grow up and become artists.

- The Artists & Ferals.
With the late 1980s gentrification of Surry Hills artists and their ilk moved west for cheaper rents. Warehouses such as Alpha House and share-houses became their garret-studios. The colour, excitement and vibrancy of these alternative life-stylists combined well with the Mediterranean feel, making Newtown Sydney’s Bohemian epicentre.

- Young Urban Professionals (Yuppies)
Ironically, by the end of the 20th Century the cosmopolitan bohemianism created by decades of poor migrants and artists made Newtown a smart investment. The accompanying rent rise, and Pokie plague, meant that many of those that had given the area it’s unique flavour were driven to Marrickville, Redfern or Melbourne (AKA Mexico or Shelbyville).

Perhaps continuing gentrification will make Newtown unrecognisable in coming decades, but the migrants and bohemians will just be somewhere else by then, waiting for the real estate agents to follow.