Benito talks with Simon Stone and Thomas M. Wright re "Baal" at the STC for CNN Go 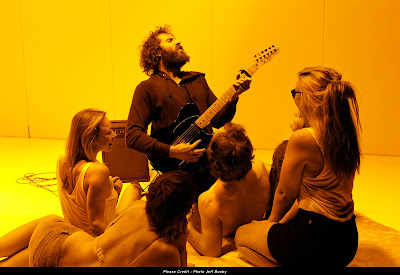 Below is the unedited copy of an article I wrote for www.CNNGo.com
The edited article originally appeared at http://www.cnngo.com/sydney/play/perverted-drunkard-murderous-monster-sydney-theatre-company-brings-baal-back-life-178630

It’s raining on the stage of The Wharf theatre, literally gallons of water galloping down upon a dirty mattress where five naked women and two men, one in stilettoes, caress and kiss one another. Facing them a sixth girl in dark glasses plays an electric guitar, standing upon an amp somehow unhindered by the storm splashing down. A man named after one of the Old Testament’s seven princes of Hell sings them a dark ballad from the opposing corner, then downs a can of bourbon and coke, before bludgeoning the head of his male lover. Welcome to Baal’s house.

At the tender age of 20 Bertolt Brecht, still a university student in 1918, penned his first play Baal. Baal is a beautifully dark poem chronicling the decadent downward spiral of an almost-famous singer and poet on Munich’s debauched cabaret circuit. Baal is a primitive monster, a fallen god from an earlier time, but of a different order to his Old Testament namesake.

“He’s a social misfit,” says translator and director Simon Stone. “We meet [Baal] at the point that he’s already an outsider and it’s unsure whether he’s ever got along in some socially condoned way with the rest of the world. By the time we meet him he shows no desire, as well as a complete incapacity, to live amongst people in a healthy, social way. He’s an antihero and really anti-social and that’s what a lot of his work as an artist, poet, songwriter derives from. He’s constantly questioning the way things in society are set up in his art, and people find that fascinating.”

35 years before Brecht penned his tale of Bacchanalian decent countryman Friedrich Nietzsche had written of the Übermensch, the Superman, a man beyond societal mores who creates his own life code.

“I have absolutely no doubt Brecht would have been reading Nietzsche,” says Stone, “but people get when they see this show that there is absolutely no condoning whatsoever of Baal’s behaviour. It is a desolate view. People love watching Don Giovanni, going ‘How many women has he slept with now, 3,042?’ And it’s funny, but Brecht had the bravery to paint a picture of someone who actually behaves like that and portray the reality of the consequences for someone who has chosen to opt out of the social contract. I think it’s not a mistake to assume that Brecht was being fairly scathing of the idea that there are certain people who are allowed to behave in certain ways because of a certain kind of socially important output they can give in the form of their creativity.”

However like so many other artists in the public eye – be it a Sheen, Manson or Cobain – the public disapproval is only equalled by their fascination with such a protagonist. Why is that?

“At a certain point in our upbringing,” says Stone, “we learnt that it’s easier to get on in the world by accepting the rules that adults were teaching us and yet there’s a massive instinctual part of us that wishes we could have just done whatever we wanted for the rest of our lives. So when we come across someone who actually never grew up, who never accepted the rules that were being laid down, who said no, fuck this, this is my way of living, if you don’t like it then move on, then there’s this amazing allure. You go (sighs) maybe there is a version of life where I don’t have accept to do things I don’t want to do?”

Thomas M. Wright who plays Baal adds, “Mike Tyson or Charles Manson or any of these people become like a fractured prism through which you can see a human being, they’re like a million pieces of shattered glass and we’re shining a light through it and watching it dance, these people who are eaten alive and eat back.”

Wright has no doubts about just how dark a monster he is embodying.

“I think he wouldn’t necessarily turn down having sex with an animal,” he says.

“Or a tree,” adds Wright, “or the ground. The difficult thing for Baal to accept is why can’t we fuck plants? Literally, why can’t we?”

Brecht seems to be saying that it is perhaps part of the artist’s role in society to explore these dark, wet woods.

“I think what he’s saying about artists,” says Stone, “is that they sign a very dangerous pact with the devil. If you want to be able to bring the brutal truth, if there is such a thing as truth, to the surface, then you need to accept that that truth is going to start weighing on you and will start affecting the way your brain works. If you open yourself to the void the void will eventually swallow you up. And the dangerous thing in being an artist is that you do have to look at the incredibly dark parts of human existence because that’s what good drama is about, and if you do that too often you’ll go mad.”

“By the time we get to Baal,” adds Wright, “he’s so open to that black hole that it’s totally inescapable.”

“Yeah,” says Stone, “you’re watching a man in the last instance before he gets sucked in [to the void.]”

Composer Stefan Gregory has arranged Brecht’s original songs for electric guitar and Baal delivers these dark ballads in a style reminiscent of a meeting between Kurt Cobain, Tex Perkins and Nick Cave as he swings betwixt poet and caveman. Surely playing such a monster night after night must take a toll on Wright’s own psyche?

“No, you know, the show goes for an hour and then I go and have a coffee.”