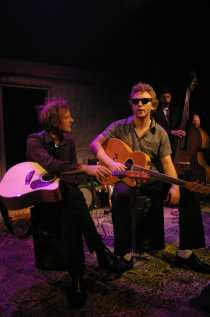 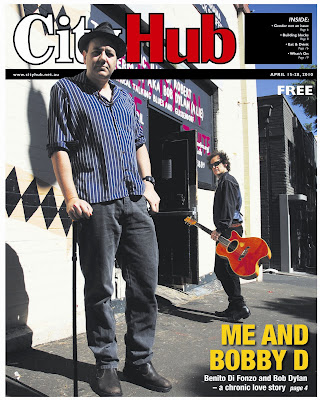 “Good poets borrow. Great singers steal.” Thus speaks Bob Dylan (Matt Ralph) in The Chronic Ills of Robert Zimmerman: AKA Bob Dylan (A Lie) – a theatrical talking blues and glissendorf. Sydney playwright Benito Di Fonzo does a little of both in his surrealo-absurdist re-imagining of the life and times of cultural legend Bob Dylan, combining quotes, lyrics, myths and his own special brand of writing to create a memorable piece of theatre. The play follows (roughly) Dylan’s life, moving beyond his own self mythologising and teaming him up along the way with, among others, Jesus, John Lennon, Yoko Ono, a hipster-Yiddish speaking Abe Lincoln and the ghost of Baudelaire hiding under a leaky faucet. If you think the title is a mouthful, spare a thought for the actors from The Tamarama Rock Surfers who manage to triumphantly tame Di Fonzo’s version of Dylan’s glissendorfing. The action is interspersed with creative arrangements of Dylan classics, artfully tweaked by Ralph and musical director Simon Rippingale to avoid licensing infringements. The overall result is a fantastically engaging hour of off-the-wall theatrical comedy. Wash it all down with a beer and laksa and you’ve got yourself a winning evening.