Theatre Preview: Ollie and the Minotaur 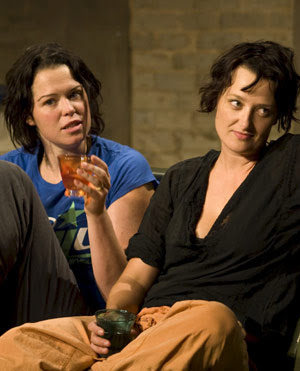 
TO WRITE convincing dialogue for his all-female cast, playwright Duncan Graham needed to find a way to get inside the "tribe", as he calls it, of 28-year-old women.
The Adelaide playwright, with director Sarah John, achieved this by setting actresses Adriana Bonaccurso, Wendy Bos and Sarah Brokensha a series of secrets and tiny betrayals to act out on one another.

"'From my point of view it's [a way of] trying to become an insider," Graham says of the process through which he created his critically acclaimed play Ollie And The Minotaur. "We see so many plays about men doing harm to each other that I wanted to explore how women might do this.

"We didn't tell the actresses anything when they came in on day one and started to introduce secrets to them and giving them actions to play, setting up improvisations that gave me a chance to listen to the way they spoke, the way they interacted, the way they dealt with these secrets."

Graham, 34, says this allowed him to understand the three women's interactions more - how they thought, the way they said certain things. Such observations helped bring about Ollie And The Minotaur.

The play tells the story of three female friends at a drunken seaside reunion on the cusp of their "Saturn return". At first, the bitchy poking at one another is all in good fun, bearing a chick-lit innocence to it. Soon, the flow of alcohol calls forth demons from a dark place within their friendship, in particular a secret from their past that occurred - like the mythical Minotaur of the title - in the centre of a local cave. As the play unfolds, the girls are brought back to that dark moment at the centre of their relationship.

"It sneaks up on you, which is great," director John says. "The three women could really bring their experiences and the stories of their friends, then Duncan could really craft it and set up the idea of those masks, so he could set up this Sex And The City world and then slowly reveal these darker themes."

Ollie And The Minotaur, which will have its Sydney debut at Belvoir St Theatre, was hailed in Adelaide and Melbourne as a triumph of naturalism. Along with the dark deprecatory humour in much of the dialogue - "That's one part of the play we can definitely say came from the actors," John laughs - the naturalistic staging is designed to help punters identify with the women as they move towards their own feared self-revelations.

"It does have that faux-doco feel," Graham agrees. "It really invites the audience to be a voyeur and get in the room with the actors and go on the journey and the downstairs space at Belvoir Street is absolutely ideal for that set-up."
John admits there have been defensive reactions from some female audience members about the same age as the protagonists but the real surprise has been how men react to the show.

"Men love it," she says. "Across the board I haven't come across or heard of any response from a guy who hasn't loved it. I think it's
nice to see three young women on stage but also it does provide some insight into this secret life of women."

Just what sorts of secrets were the girls fed in rehearsal? "They were simple ones to begin with, just telling them about their character, and then little bits of information about the other person because the devil's in the three, the interaction of three people, particularly in friendships with women."

Betrayal, it would seem, is a dish best served with gin and tonic.