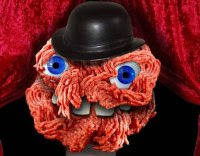 Benito Di Fonzo's most recent short play "Meat Puppet Epiphany" will be playing downstairs at The Seymour Centre, Sydney, from Feb 4 - 7 as far as Short & Sweet 2009, the world's largest short play festival (www.shortandsweet.org ). I've had a play in every Short & Sweet so far, including "Pokie Face" in 2002 which later toured around Australia as part of the best of Short & Sweet, and "9/11 Conspiracy: The Musical" in 2007 which won 'Best New Talent' at the Gala Finale. Last year's show "The Chronic Ills of Robert Zimmerman, aka Bob Dylan (A Lie)" has been expanded into a full length show to be staged at The Old Fitzroy in a few months (watch this blog for details.

"...I've never been backward in coming forward but i'd hate for you to end up beside yourselves in the end..."

This journey through Benito's imagination is an absurd visual feast, showcasing an awesome cast from Wollongong and Sydney.

Short+Sweet is the world's largest and highest profile short play festival bringing together some of the best talent in Sydney with the vision from writers both Australian and abroad.

Written by the talented Benito di Fonzo, writer for the Sydney Morning Herald, Meat Puppet Epiphany is not to be missed.


The Seymour Centre is conveniently located on the corner of City Road and Cleveland Street, Chippendale and can be easily reached by public transport or by car.

For the full programme of Short & Sweet 2009 go to
http://www.shortandsweet.org/sites/ss.ish.com.au/files/FestivalSchedule.pdf